Are you interested in mining Bitcoins but don´t know much about cryptocurrencies? Then you may welcome our detailed manual for beginners that will tell you how to mine Bitcoin step by step. If you want to learn more about the principles behind mining and how Bitcoin mining works, read our article Bitcoin mining in theory: what is the principle of mining?

1. Get a Bitcoin mining rig

If you want to start mining in the first place, you have to own a mining rig. Although in the beginning of the Bitcoin history, miners used ordinary domestic computers, and later graphic cards, today you will not acquire any Bitcoin with these machines (or more precisely you may gain something, but it will be a really small amount in a very long period of time).

Nowadays, Bitcoins are mined by special hardware designated just for mining Bitcoins or other currencies based on the same algorithm. It is called ASIC (Application-Specific Integrated Circuit chips), uses less energy and mines Bitcoins much faster. This device is expensive and its manufacturing is time-consuming, however, its speed is astonishing. The most powerful machines manage to solve as many as 14 terahashes per second (which means it does 1012 attempts to solve a block per second) and its development goes ahead constantly.

Choose one of our virtualization platforms and set the parameters of your VPS server according to your ideas.

How to choose an ASIC mining rig?

If you are thinking about starting mining, you should concentrate on the following parameters during your selection: performance (hash rate), consumption of electric power, and price. Hash rate indicates how many attempts to solve a block can the machine make per second.

We recommend you go through various miners’ reviews and then choose the one which seems most advantageous to you. Don´t choose solely according to price, focus on the overall proportion of price, performance, and consumption. To put it in simple terms, the most efficient miner is the best one. You can inspire yourself on the webpage Asic Miner Value where detailed information about new miners is displayed.

Keep in mind that it could be very difficult to get these devices these days because the demand is extremely high. It also influences the price of these devices which varies between hundreds or even thousands of dollars.

Before you buy an ASIC miner, try to calculate the profitability of the chosen device in an online calculator (f.e. Nice Hash or Coinwarz, for multiple currencies try What to mine). Apart from parameters of your mining rig, the calculation also includes the price of electricity, fees from mining pool or the level of mining difficulty. You will find out whether mining can be profitable or how much money you have to invest in the beginning.

During your decision making, take into consideration the increasing difficulty of the mining as well as declining profit over time. What does it mean in practice? If the difficulty increases by about 10% after 14 days, the profit declines by about the same 10%. Find more information about mining difficulty in our article Bitcoin mining in theory: what is the principle of mining? 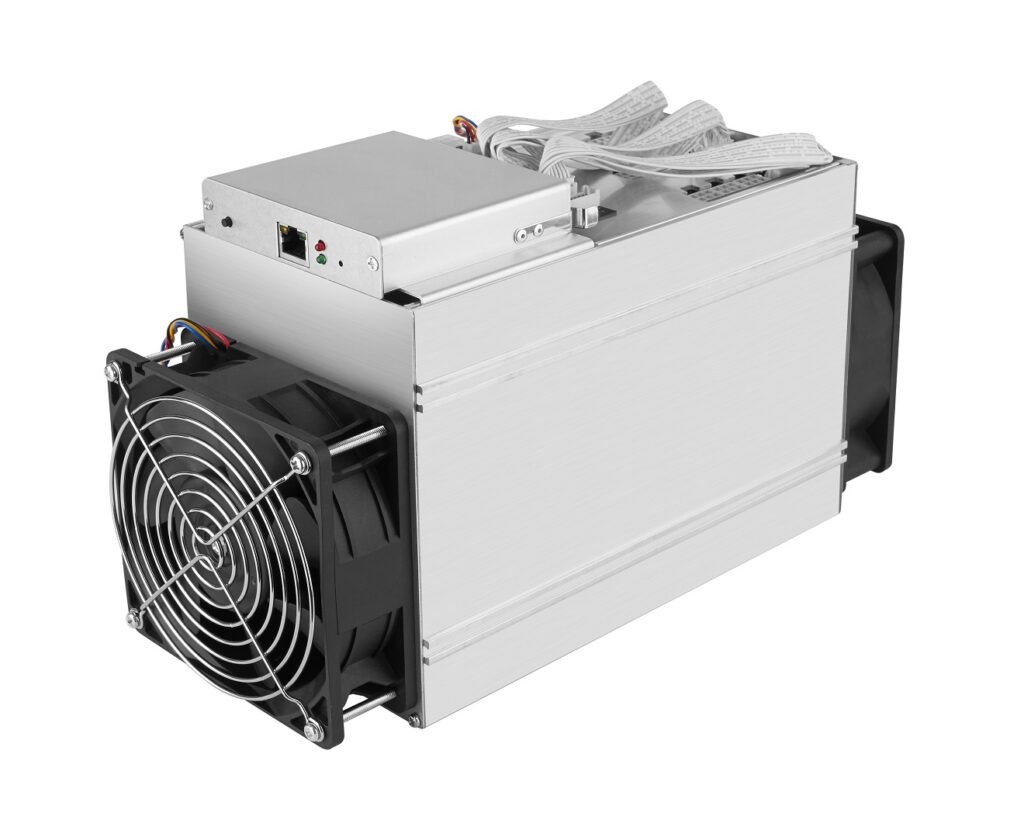 Where should you put your machine? Into a professional data center

Bitcoin mining demands not only a lot of electric power but also a special place for a machine as mining rigs are noisy and emit a lot of heat. The service miner housing provides a solution to this problem – you can place your machine into a professional data center and get rid of all these concerns. You will profit from a lower price of energy, cooled area, constant monitoring and you won´t be bothered by any noise.

How are other cryptocurrencies mined?

2. Get a Bitcoin wallet

The next important step is to set up a Bitcoin wallet. That’s where you will receive your Bitcoins and will be able to manipulate with them. Bitcoin wallets allow you to manage your Bitcoin addresses (Bitcoins themselves are technically stored in the Blockchain).

Each Bitcoin address has a form of a public key and matching private key. The public key comprises of a unique combination of characters and it looks for example like this: 18ukxpD1eqnVjux13ehEz8r4d8py1dSdzw. It works basically like a bank account number so if you want to receive Bitcoins from somebody, you have to tell him your public key. Every bitcoin address is public and you can trace back every transaction that passed through it. In contrast, the private key is secret and it serves to send off transactions. If you lose your private key, you lose your Bitcoins placed on this particular address forever.

In general, there are multiple types of wallets from simple online wallets, software ones to the most secure hardware and paper wallets. Each wallet has its advantages and disadvantages. Some of them can keep multiple currencies at the same time.

Which wallet is the best for beginners?

The best option for starting miners is a software wallet. It is secure but still easy to manage and suitable for frequent manipulation with mined currency. You easily download a wallet to your computer, where your coins will be stored and nobody can get to them.

There are two kinds of software wallets: full ones which download the whole Blockchain or light-weight ones which store only relevant transactions. The first option requires a lot of space and memory in your computer but is definitely safer. On the contrary, the light-weight variant is connected with Blockchain managed by a third party and you can´t fully control it.

If you have decided to choose a full version of the wallet, you can download f.e. the original Bitcoin Core. Take into account that its full synchronization takes a couple of hours because the Blockchain currently is the size of tens of GBs. Set your own password to the wallet in the programme and don´t forget to save a copy of your wallet on another device, otherwise, your Bitcoins will be lost forever in case of any failure of your computer. If you prefer a wallet which can manage multiple currencies, you can try Exodus. 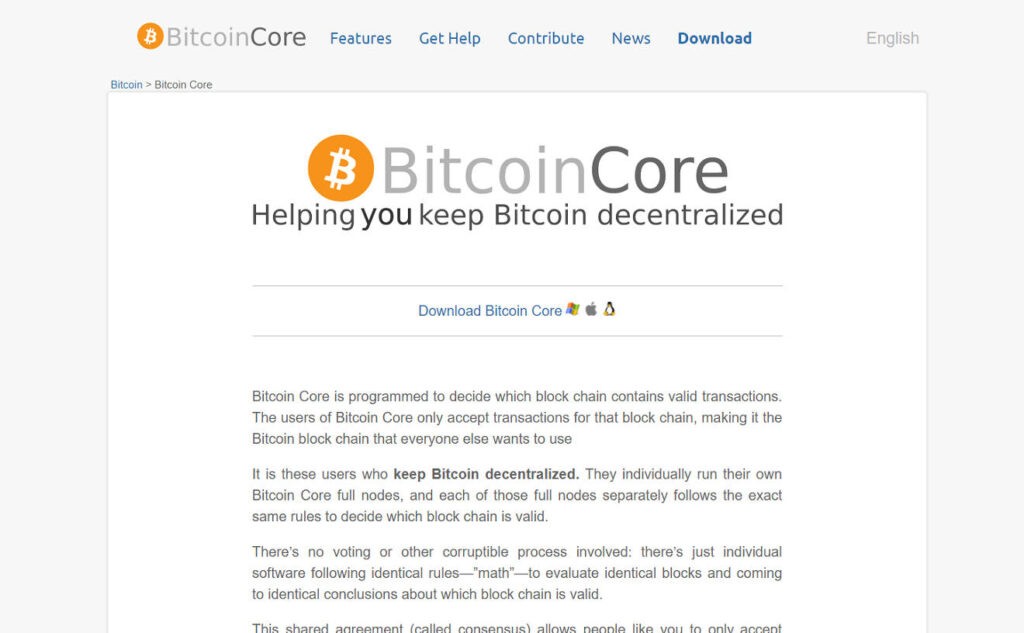 Even with the best ASIC miner, it is almost impossible to gain Bitcoin today. A single machine can´t compete with many large mining farms all around the world and mining Bitcoins on your own isn´t always profitable. But don´t worry, there is one solution to this situation – cooperation between miners in so-called mining pools.

Miners provide their computing power to a group and when Bitcoins are mined, the gain is divided among members according to a given power. The income is lower but regular. However, members of a pool have to pay a fee to an operator of the pool, the price of fees is usually around 0 and 2% of the received reward.

You can choose from many pools, this graph from 2017 illustrates the representation of the biggest pools. For better orientation, you can use the comparison of mining pools on Bitcoin Wiki. It is recommended for beginners to try Slush Pool, the very first pool in existence and is considered one of the most credible ones. Here’s an interesting fact –  a Czech programmer Marek Palatinus is responsible for the birth of Slush Pool.

As soon as you choose a mining pool, register yourself on its website and set your account. Afterward, you will receive a worker ID for your miner. 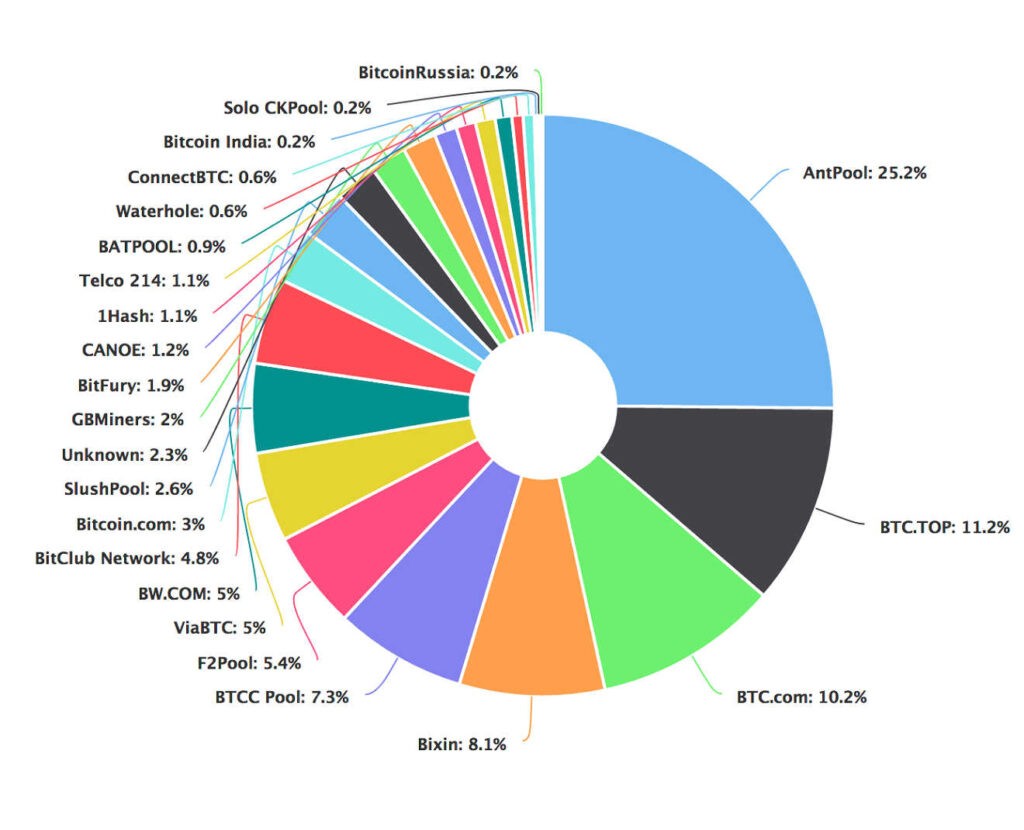 Graph from 2017 illustrates the representation of the biggest pools.

4. Get a mining programme for your computer

Now you have your hardware, a Bitcoin wallet and chosen a mining pool, so it´s time to get a mining client to run on your computer. It connects you to the Blockchain and Bitcoin network. Mining software delivers work to miners, collects complete results of their work and adds all information back to the Blockchain. In addition to that, Bitcoin mining software monitors miner´s activities and shows basic statistics like temperature, cooling, hash rate, and average mining speed.

In general, there are many free programmes used to mine Bitcoins, the best programmes can run on almost all operational systems and each of them has its advantages and disadvantages. Some mining pools also have their own software.

Beginners will appreciate Nice Hash Miner. It is very easy to use, mines multiple cryptocurrencies and automatically chooses an algorithm which is the most profitable in a particular moment. Download the programme and choose a device you would like to mine with.

And now you can start mining and earning Bitcoins! Connect your miner to a power outlet, link it with computer and install mining software. Fill in your information about your wallet and mining pool into the mining software, choose a device, and let the mining begin!

Some advice to send you off: if you want to mine profitably, keep track of the news from the crypto world. The development goes ahead very fast and it changes on a day to day basis.